Recently, on December 9th, I flew down to Walt Disney World to meet the newest Members of the Moms Panel Family. In addition to an informal lunch on Friday, there was a special Cocktail Reception on Saturday for the alumni and new Panelists to spend a few moments together. One of my fellow alumni Moms likens that hour to “speed dating”, and it’s the perfect analogy. With 15 new Panelists and 60 minutes, you have 4 minutes max per person. That’s barely enough time to say hello, let alone form any sort of friendship. Still, it is a fun-filled hour of laughter and memory making that we all appreciate and cherish. Thankfully, I had taken the chance to reach out to them prior to the trip and had spent some time chatting with several new Panelists through either email, text, instant messaging or over the phone. Having been new myself once, I so clearly recall the nerves, questions and how wonderful it was to have someone to speak to way back then. Two years ago, along with other alumni Moms and Dads, we met some of the newest Members at the Big River Grille for lunch. This was not part of the official Training Weekend, it was simply an informal chance to spend some time getting to know each other before their non-stop weekend began. Those 2011 Panelists later told us how much they enjoyed that time, and how it was such a wonderful ice-breaker for them. So this past December, we did something similar at the Captain’s Grille. We don’t talk about itineraries or what they can expect over the weekend. We simply enjoy meeting our newest brothers and sisters. We all thoroughly enjoyed that time together and the laughs that we shared. Since the newest pixie dusters joined our team in December, it has been wonderful to really get to know them. In fact, I chat quite frequently with various ones and I look forward to making countless memories together at the Moms Panel Reunion this year. They had me at “hello” and I love them all dearly already. 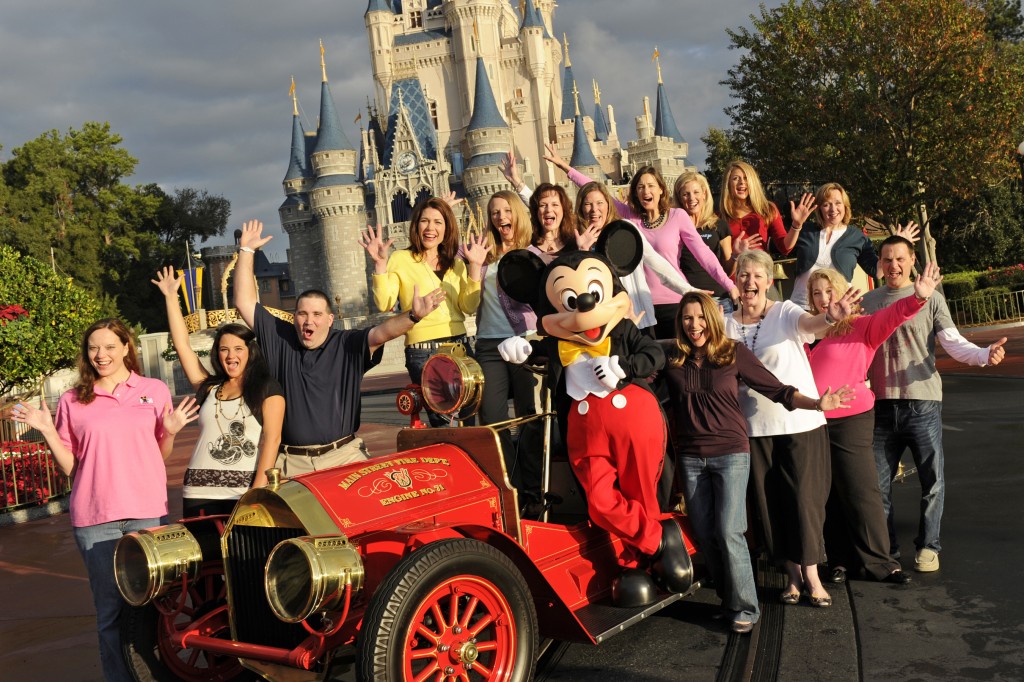 This year, in addition to helping plan vacationsÂ to Walt Disney World Resort, Disney Cruise Line, Adventures by Disney and Disney Vacation Club, the Panel helps plan Disneyland and runDisney trips as well. In addition,Â several Moms are now answering questions in Spanish. Below is the official Disney Parks Press Release with more information about these awesome new Panelists. I look forward to featuring them on Disney Moms Panel Monday throughout the year.

“Lake Buena Vista, Fla., Jan. 12, 2012- Disney Parks announced today the Walt Disney World Moms Panel has unveiled a new feature â€“ the panelists can receive and answer guestsâ€™ questions in Spanish. In addition to the first-ever bilingual offerings, two new specialty areas will be added to the site âˆ’ Disneyland Resort and runDisney. These features are available to guests at www.DisneyWorldMoms.com.

â€œWhen we first launched the Moms Panel in 2008, we dreamed of offering guests the ability to ask questions in various languages. Launching the Spanish option in our fifth year turned our dreams into reality and weâ€™re excited to see the questions and new visitors to the site that come as a result of these new features,â€ said Leanne Jakubowski, Director, Social Media; Walt Disney World Resort.â€ As Walt once said, â€˜You can design and create, and build the most wonderful place in the world. But it takes people to make the dream a reality.â€™ The Walt Disney World Moms Panel is living proof of that statement and we believe Walt would be proud of the magic our panelists are making for families around the world.â€

Disney Parks received thousands of applications from the U.S., Canada and United Kingdom to be considered for the Walt Disney World Moms Panel. Each panelist went through three rounds of interviews before they were selected to follow in the footsteps of more than 60 moms, dads, grandparents and guardians who have signed on to share their knowledge and passion for the Disney brand with others.

– Amanda Ficili; Mendocino, Calif. (Disneyland Resort) â€“ Known as the â€œDisney Go To Girl,â€ this stay-at-home mom is a coast-to-coast Disney Parks storehouse of knowledge. The proud holder of a Disney Premiere Passport, Amanda grew up a short while from Walt Disney World and now spends every moment she gets enjoying Disneyland Resort.

– Andrea Houston-Lingman; Jamison, Pa. (Disney Vacation Club) â€“ A high school English teacher by day and a â€œDisney Sherpaâ€ by night, this Disney Vacation Club Member enjoys Disney vacations of all shapes and sizes. When sheâ€™s not teaching, Andrea chaperones Walt Disney World trips for students and enjoys the parks with her husband and two children.

– Ari Krell; Reseda, Calif. (Disneyland Resort) â€“ Growing up in the shadows of Sleeping Beauty Castle, Ari is now the father of two little princesses of his own, guiding his girls around Disneyland, from the twists and turns of Space Mountain to breakfast with Cinderella. Never far from the magic, this Disney dad thinks of Disneyland Resort as his own backyard.

– Ashley Forster; Suffolk, Va. – As a proud military wife, Ashley has visited Walt Disney World on her honeymoon, with her husband and two children, and on her annual solo â€œmommy timeâ€ trip. When this Disney vacation planning addict is not preparing for or enjoying a visit to the Mouseâ€™s house, she and her crew like to explore the magic of their local area, taking road trips or soaking up the sun at the nearest beach.

– Elisabeth Lackey; Myrtle Beach, S.C. (Adventures by Disney) â€“ From the Great Wall of China to the open planes of South Africa, Elisabeth and her family have traveled the world with Adventures by Disney. When she is not embarking on unforgettable global adventures, Elisabeth can be found teaching preschool, tucked away with her favorite book and of course, planning her family of sixâ€™s next Disney vacation.

– Jodie Hilson; Thomasville, Ga. â€“ This registered nurse has grown up with Walt Disney World â€“ from losing her first tooth on her first visit to the Magic Kingdom to riding Toy Story Mania with her four children. Jodieâ€™s family of six loves all things Disney so much they named their gray colored cat â€œPixie!â€

– Kim Dillen; Charlotte, N.C. â€“ A self-proclaimed â€˜Type Aâ€™ planner, Kim has experience visiting Walt Disney World as the parent of a special needs child, and believes that itâ€™s the little things that can add the most magic to a vacation. Along with her husband and two children, Kim has seen and done it all, from Hidden Mickey hunts to Magic Kingdom birthday celebrations.

– Kirsten Etmanski; Burlington, ON â€“ Since she was seven years old, Kirsten has been making the journey from her home in Canada to Walt Disney World. A stay-at-home mom to a son and daughter, Kirsten spends her day dreaming of an â€œAround the World â€“ a la Disneyâ€ vacation, planning her extended familyâ€™s next family reunion and helping friends and neighbors plan their own magical getaways.

– Laura Munkel; Elkhart, Ind. (Disney Vacation Club) – As a family practice physician, Laura is known as an expert around the office when it comes to anything and everything Mickey Mouse. Laura and her family have traveled around the globe with their Disney Vacation Club membership, from Orlando to Germany, Anaheim to Castaway Cay, this mother of three believes that fairytales truly do exist.

– Lori Lovell; Morganfield, Ky. (runDisney) – When sheâ€™s not participating in a runDisney event, this sports broadcasting major turned homeschooling mom is busy planning her familyâ€™s next Disney vacation. As a mom of two boys, Lori has celebrated many major milestones at Walt Disney World, including runDisney weekends with her husband, friends and family.

– Nancy Walshe; Lilburn, Ga. (Disney Cruise Line) â€“ From the moment she first saw the Disney Wonder docked in Port Canaveral, this teacher of special needs students has been hooked on planning Disney Cruise Line vacations. Whether she is sailing the high seas with her extended family or running the Princess Half Marathon at Walt Disney World, Nancy is dedicated to spreading pixie dust everywhere she goes!

– Scott Houston; Calhoun, Ga. â€“ Much like the middle school children he works with daily as an assistant principal, Scott loves unleashing his inner child on his Disney vacations. Scott enjoys collecting priceless memories with his wife and son from Test Track to the decks of Disney Cruise Line.

– Stacy Cacciatore; Fort Mill, S.C. â€“ As an author, tri-athlete and fitness guru, Stacy is passionate about making exercise and health fun for all ages. As a mom of a prince and princess, Stacy also loves making memories at Walt Disney World with her family, celebrating her childrenâ€™s birthdays in the parks each year.

– Sue Farrell; Little Sutton, Cheshire (UK) â€“ From across the pond, Sue is always preparing for her familyâ€™s next extended stay at Walt Disney World. Having experienced everything from Easter to a hurricane in the parks, this UK mum enjoys helping others plan their international magical escapes.

Alumni panelists will also join in and continue sharing their time-tested tips and advice on the Walt Disney World Moms Panel. Guests can find all panelists answers, an extensive library of how-to videos, some to soon be available in Spanish and more at www.disneyworldmoms.com.

Entering its fifth year, the Walt Disney World Moms Panel is an online forum where guests can get tips and insights for a Disney vacation from real moms, dads, grandparents and guardians who have mastered the art of planning Disney vacations. Guests can pose questions to the panelists, as well as gain access to other vacation-planning tools for booking a Disney vacation. Featuring just 12 members during its inaugural year in 2008, the panel now boasts 42 park-savvy panelists as a result of the popularity of the site and an ever-growing number of questions submitted by curious guests. For more information and to meet the panelists, visit www.disneyworldmoms.com.”