Making Memories at “Peter Pan the Show” in Boston 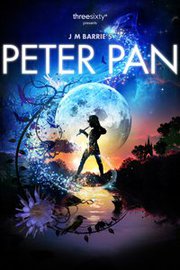 I had the pleasure of attending Peter Pan this past weekend at the “threesixty Theatre” in Boston. I was very excited when I received the invitation from Chevy Queen of the Road, and I couldn’t wait to bring my family. This magical performance is now showing in the heart of Boston at City Plaza and it will be there through November 27th. My children are all passionate Disney fans and they’ve only always known the animated version of the story, so I wasn’t sure what sort of reaction to anticipate from them. Unfortunately my 11 year-old son, who has always been a huge fan of Peter Pan, ended up having to miss it due to a commitment to his basketball team. In addition, my oldest daughter had other plans. We ended up inviting my mother-in-law, and the kids had fun watching the show with Grandma. In addition, my 15 year-old son brought his friend with him. Â As much as I’m disappointed that my entire family couldn’t go together, it actually worked out well in that I was able to experience it with 3 generations. Also, I can share the perspective of two teen boys with you.

We paused at the entrance to take a photo, and the boys were great about jumping in for the sake of our two little girls… 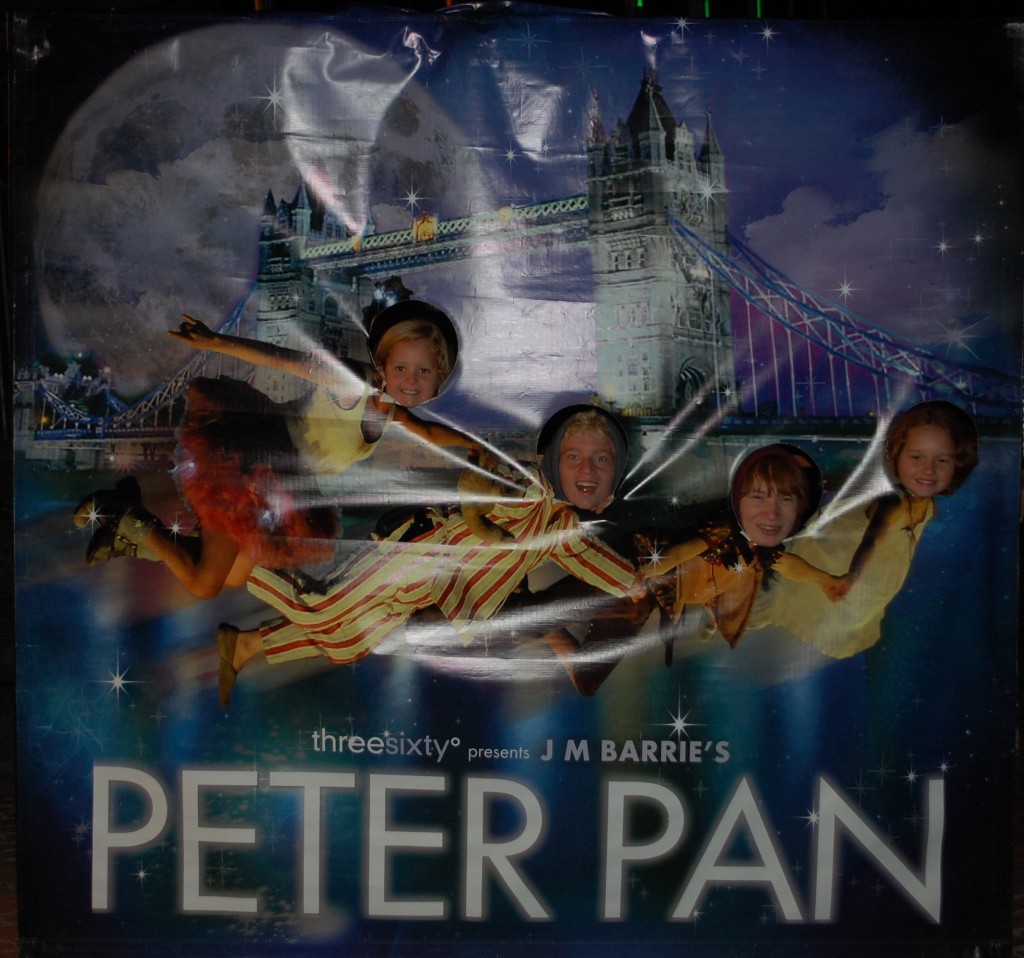 We arrived at the show with 30 minutes to spare and located the unique threesixty Theatre.Â 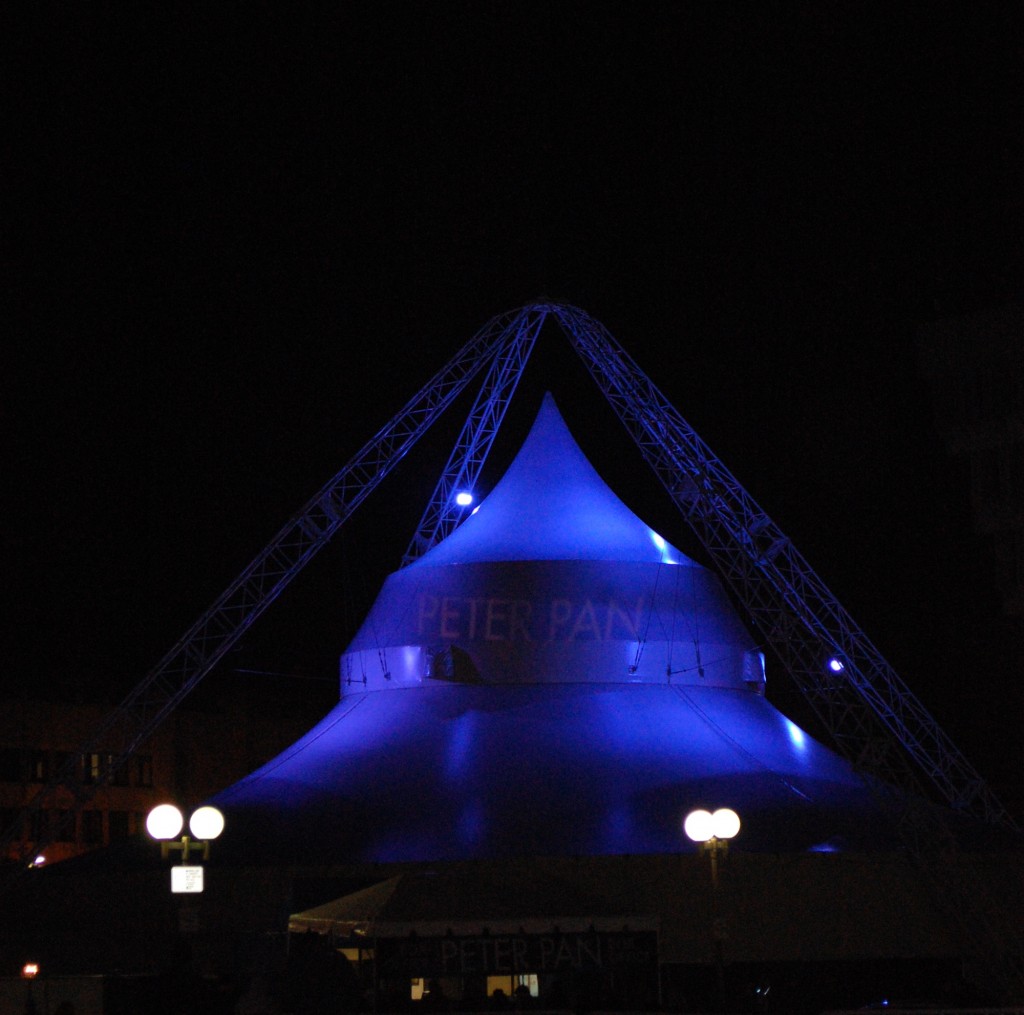 At that point we were presented with a program which gives a great overview of what we were about to experience. Quoting a few lines:

“With the threesixty launch of Peter Pan we sought to remain faithful to J.M. Barrie’s original story and produce an entertainment for everyone. It was a privilege to stage the show in Kensington Gardens in the summer of 2009, the very place where the Llewelyn Davies children inspired Barrie to create ‘Peter Pan’ over 100 years ago, and we are delighted to bring it to the USA. Our goal at threesixty is to re-imagine classic stories for the stage in a form that appeals to every age. Each element of the threesixty experience, from the use of ancient traditions to cutting-edge technology, is dedicated to creating magic for our audience. The threesixty Theatre provides freedom of movement to the performers, clear sightlines for the audience and the world’s first 360 degree projected environment for live entertainment. The theatre is literally part of the show…”

We were very excited to see what was behind the curtains… 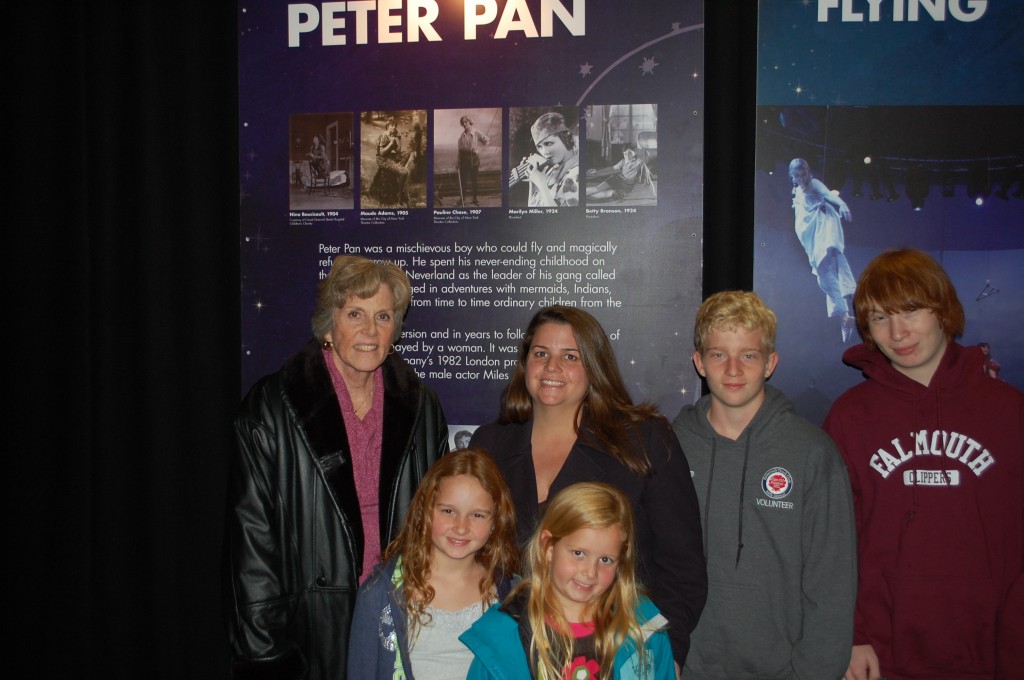 Once inside, and before the show began, I snapped a photo in an attempt to capture the feel of it (photography is prohibited during the show for the safety of the Cast). 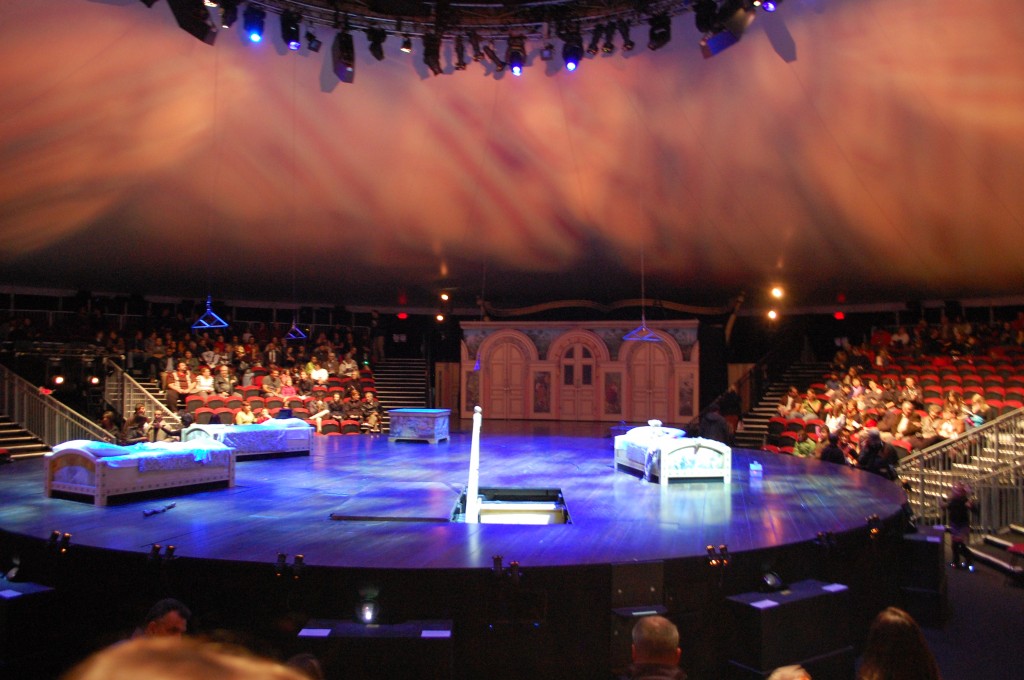 You can see the screen that surrounds the theater, and there isn’t a bad seat in the house. At this point, we had absolutely no idea how magical of evening we were about to experience!

From the moment the show began, we were all completely captivated by the entire performance. The special effects were incredible, the acting superb and the story enchanting.

Peter Pan takes the Darling children on an “awfully big adventure” to Neverland. If I had to choose a favorite scene from the play, I would find it extremely difficult. Each part was bursting with special effects. I especially enjoyed the moment when Peter Pan and Tinker Bell flew to London, holding hands with each other. Being surrounded by scenes from London on the screen, Â I felt as if we were really flying too. It was, in a word, “magical”.

During the Intermission, I glanced down at my phone and discovered that my son had posted an update to his Facebook status. It said: “Watching like a Broadway show of Peter Pan in Boston…I like it.”

At that point, I asked my nine year-old daughter what her favorite part was so far. She looked at me and said, “All of it”! I then turned to my 7 year-old little girl and asked if she liked it. Â She immediately said, “NO! I don’t LIKE it…I LOVE it!!” Believe it or not, she decided that it only got better from there. As the show continued, we arrived at what would be her favorite scene. Tinker Bell drinks the poison to save Peter Pan and she is lying there, not moving. Peter begins pleading with the audience to chant with him to wake up Tink: “I believe in fairies”, “I believe in fairies” , “I believe in fairies”! As the audience got increasinly louder, Tinker Bell slowly stood up and then began flying. I turned to look at my little girl and her face was beaming…it was pure magic!

After the show, the young children were invited to capture their favorite “magical moment” on a sticky note.

They then carefully placed them on the board… 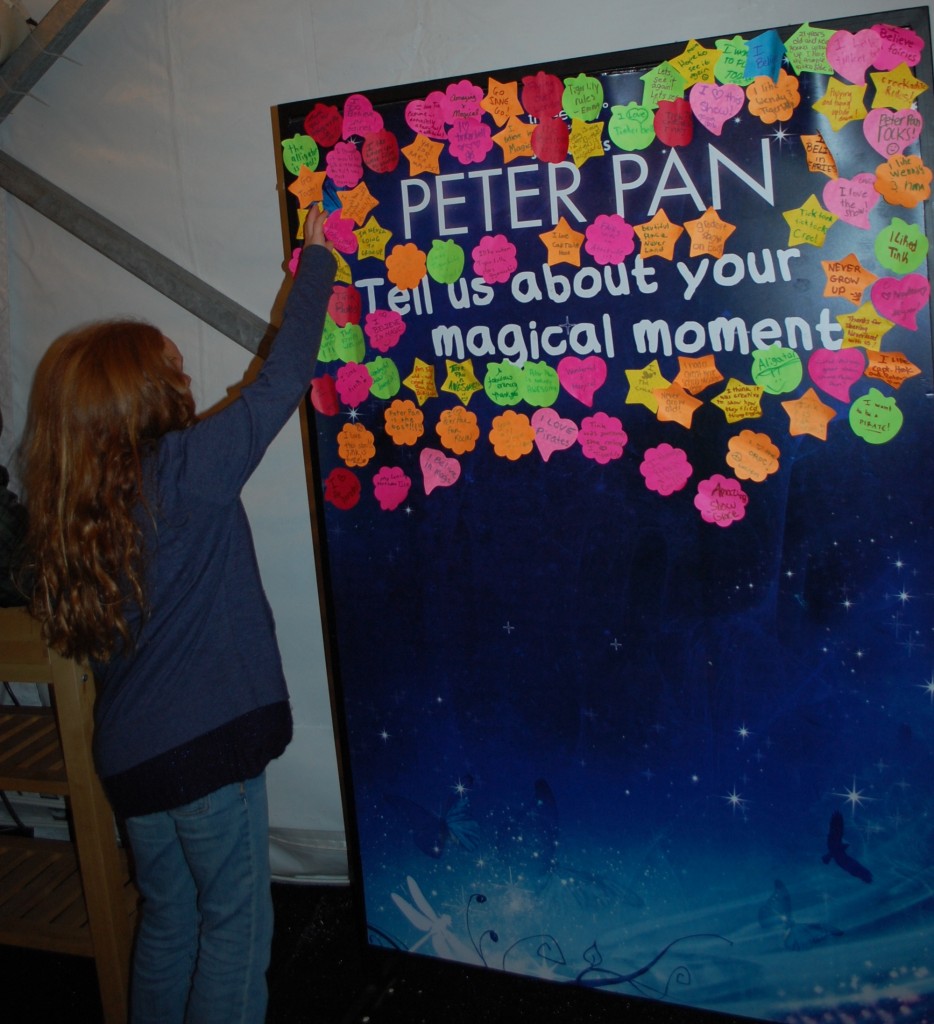 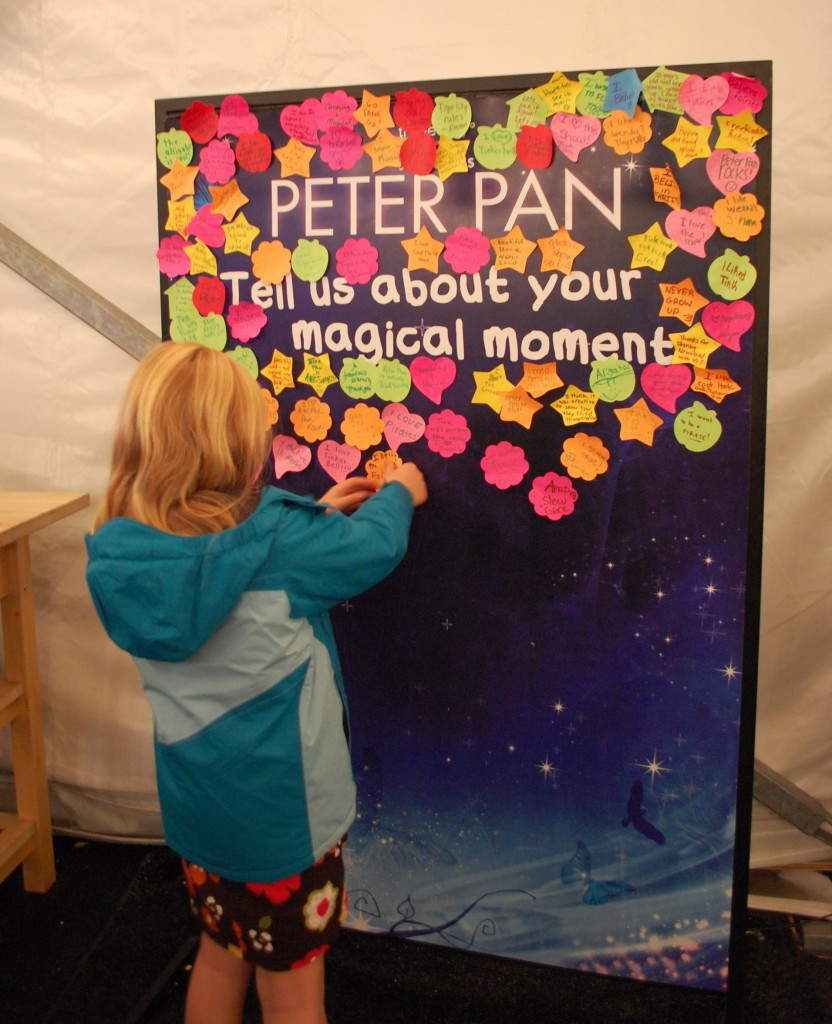 Both of my little girls especially loved the spirited pixie Tink. We learned long ago that “good things come in small packages” and Tink proves that beyond a shadow of a doubt. 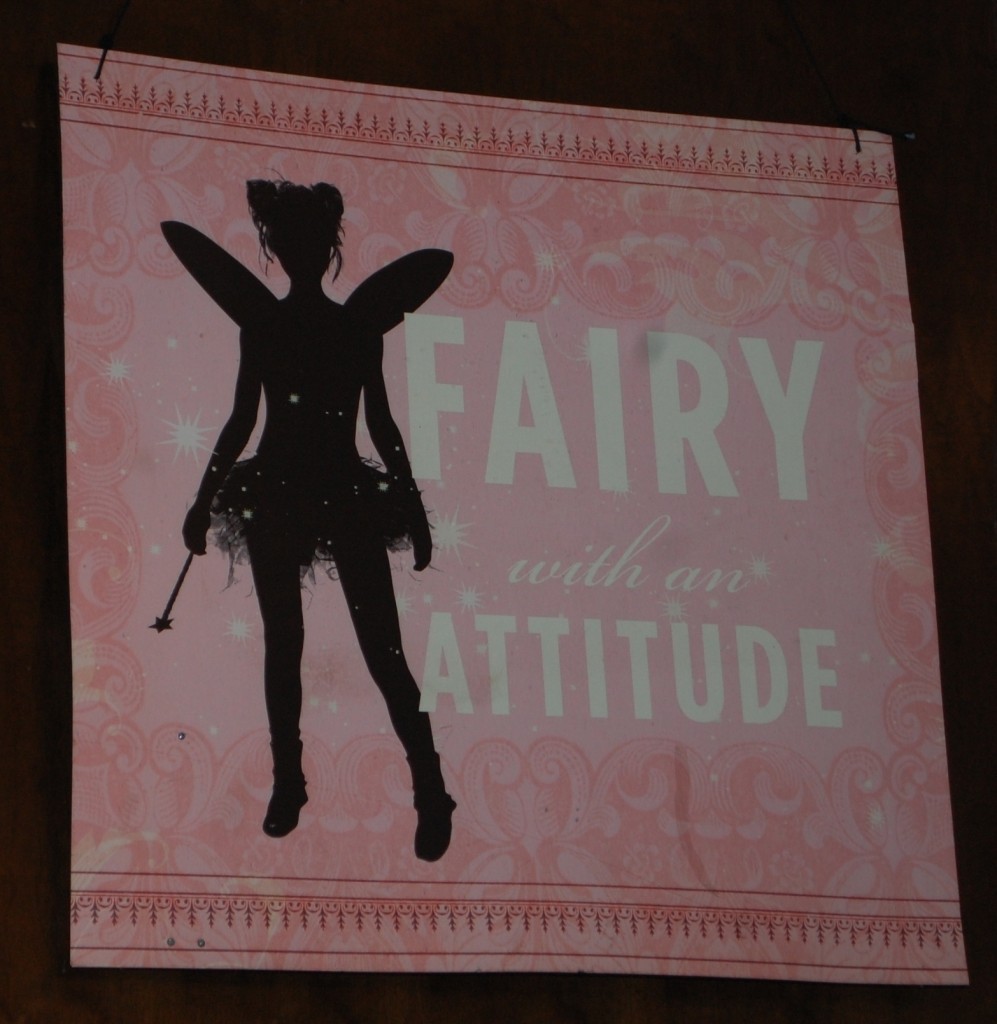 As we left the show my mother-in-law shared that she thought it was a wonderful show. She “enjoyed it very much”. I then asked the boys for their honest opinion. They both said that it was great. My son later elaborated that he thought “the acting was really awesome and all of the special effects and flying were cool”. Â My husband noted that the slow motion scene when Captain Hook and Peter Pan duel on the plank was one of his favorite parts. He had never seen a slow-motion scene in a movie that was acted out in slow-motion live. The actors did an amazing job.

If you have the chance to see this phenomenal show, I highly recommend it. 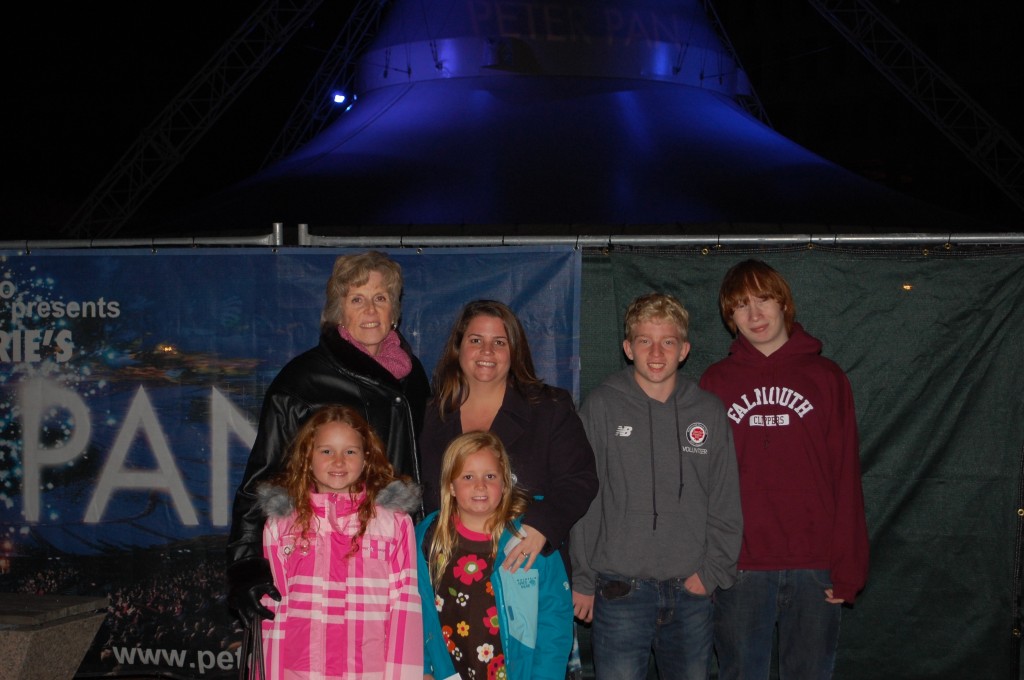 To quote one of my favorite lines from the show, Peter Pan discovers that “to live would be an awfully big adventure.” I encourage you to seize the opportunity to take a break from your hectic and schedule and make memories with your family watching Peter Pan in Boston. 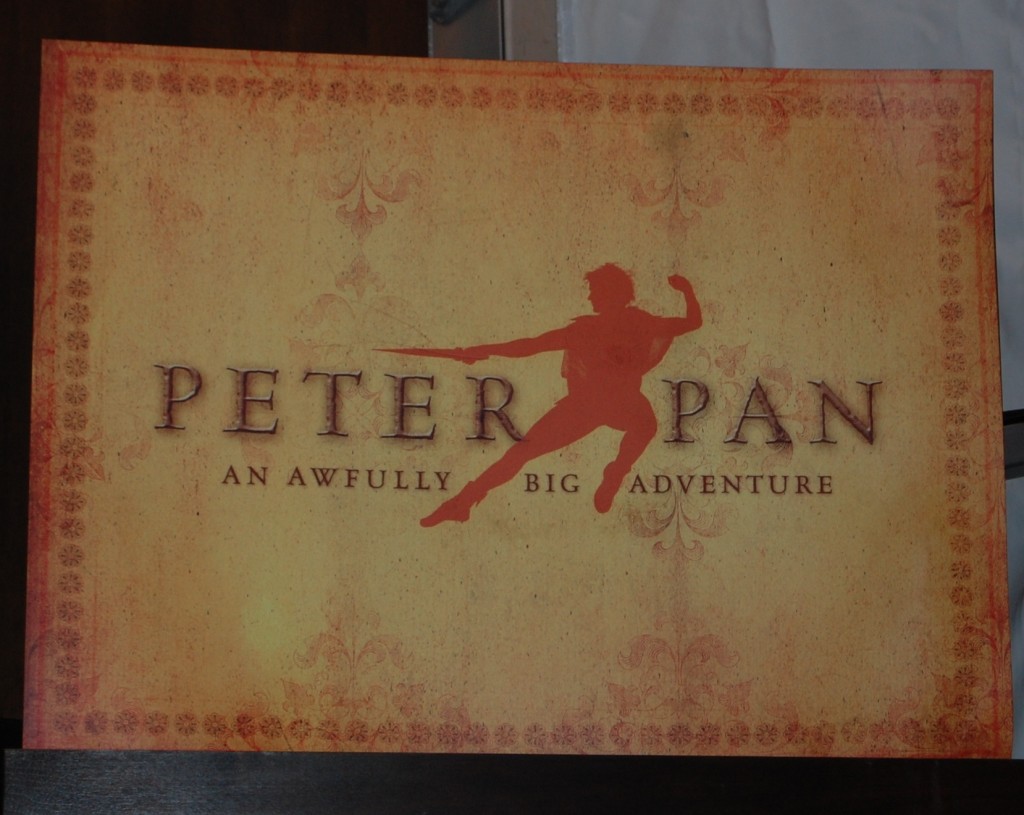 Disclosure: My family received tickets to this event. The opinions expressed are entirely my own and I could not have enjoyed the show more.Â