So…a little history about that “deal” that I mentioned in my previous post. The 2010 Moms Panel application process began back in September, questions for those moving on to “Round 2” came in mid-October and the “Final Interview Phase” was at the end of October. Somewhere around the middle of October, Kathie and I began messaging each other on the DIS boards. We remembered each other from the previous year (s) processes. She had been a finalist for the ’08 panel, and I had been for the ’09 one. It just wasn’t meant to be back then. We knew how much this dream meant, and quickly became a sense of support for each other along with a big group of “hopefuls” on the DIS boards. While our family’s knew how much we wanted to be able to achieve this dream, we truly understood how very much this magical wish meant…because we shared it in common. Somewhere after Round 2 and before the Final interview phase, when we were instant messaging on Facebook one night, the conversation led to our favorite rides at Disney World. I mentioned how much I love Tower of Terror, and Kathie informed me that she had never been on it. *gasp* Never been on Tower of Terror?! We HAD to fix that. 😉 So, we made a deal…if somehow we both were blessed enough to make it on to the Panel, we would ride Tower of Terror together. 🙂 She told her husband who said he’d have to see a picture for proof 😉

Well, we were just given “Free Time to Enjoy the Parks”…so guess where we were headed?! We went through the International Gateway and jumped on a ferry to Disney’s Hollywood Studios. Marc, Joel and Maria joined us…we were SO excited! 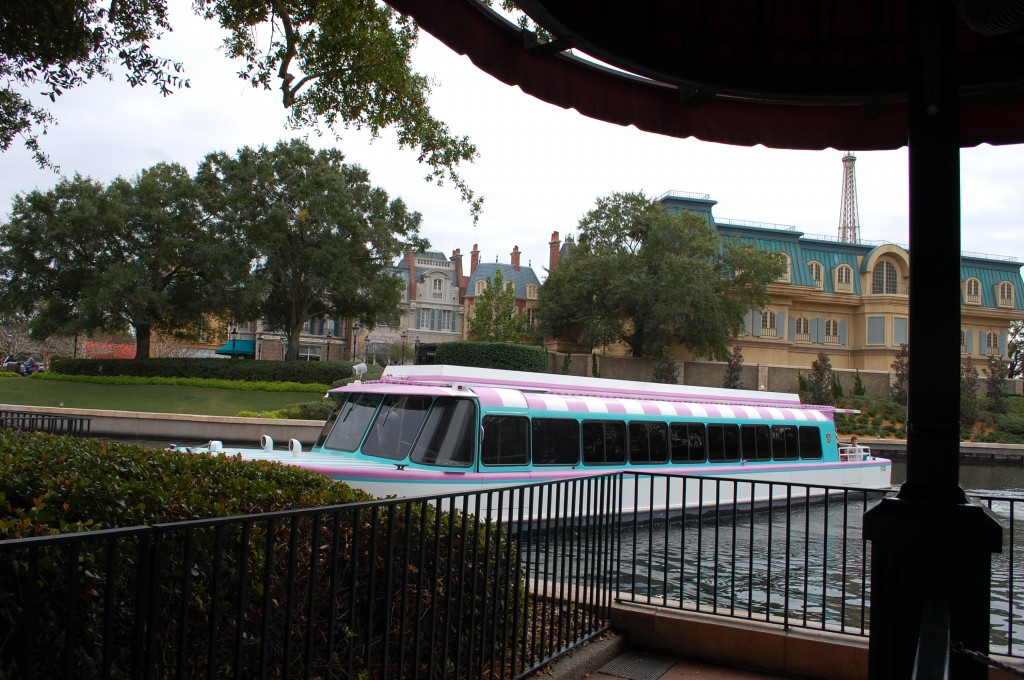 The guys sat outside on the “deck” while Maria, Kathie and I relaxed inside. At one point, I jumped up to take a photo of the Dads. Joel smiled right away, and I thought it was odd that our resident photographer wasn’t smiling for me too. I said, “Smile, Marc!” and he didn’t. Joel started laughing and informed me that Marc was asleep!! 😉 He gave me a thumbs up and I snapped a pic. 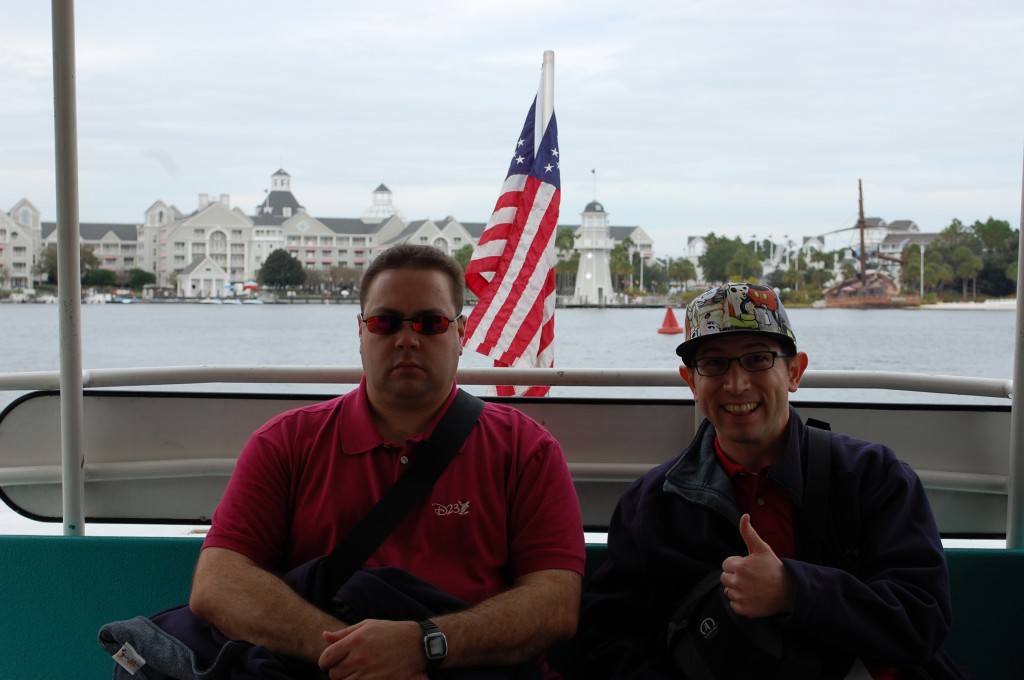 Here he is nudging him, LOL. Poor Marc, we were just playing with you because we love you. 🙂 It’s no surprise that he fell asleep, we were ALL rather exhausted at this point…running on pure adrenaline and excitement. 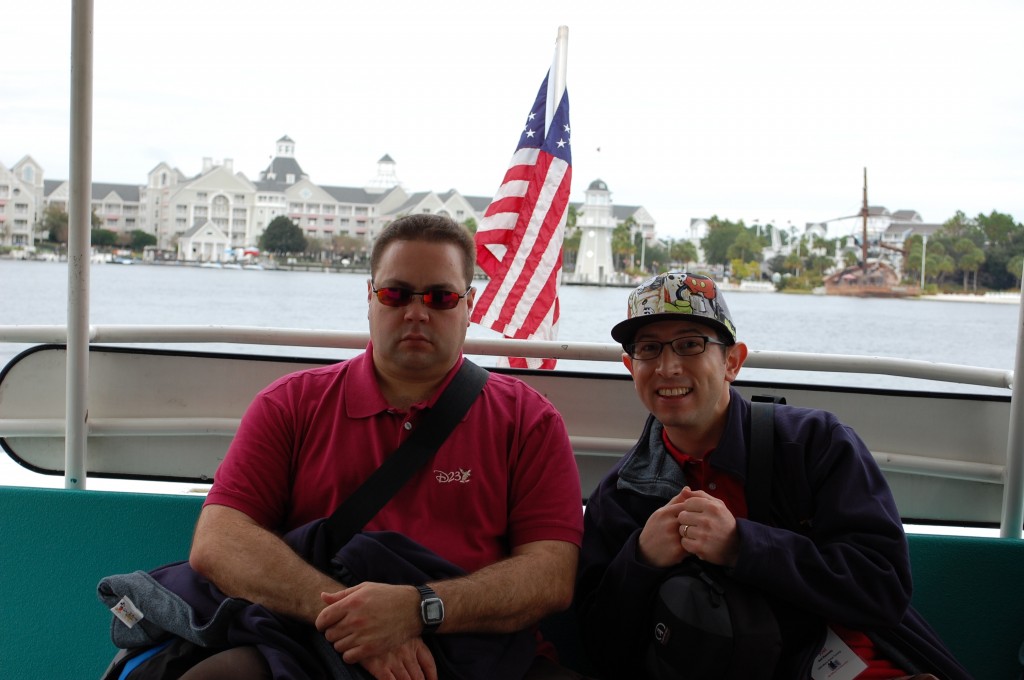 We arrived at DHS, and were greeted by this gorgeous Christmas tree. 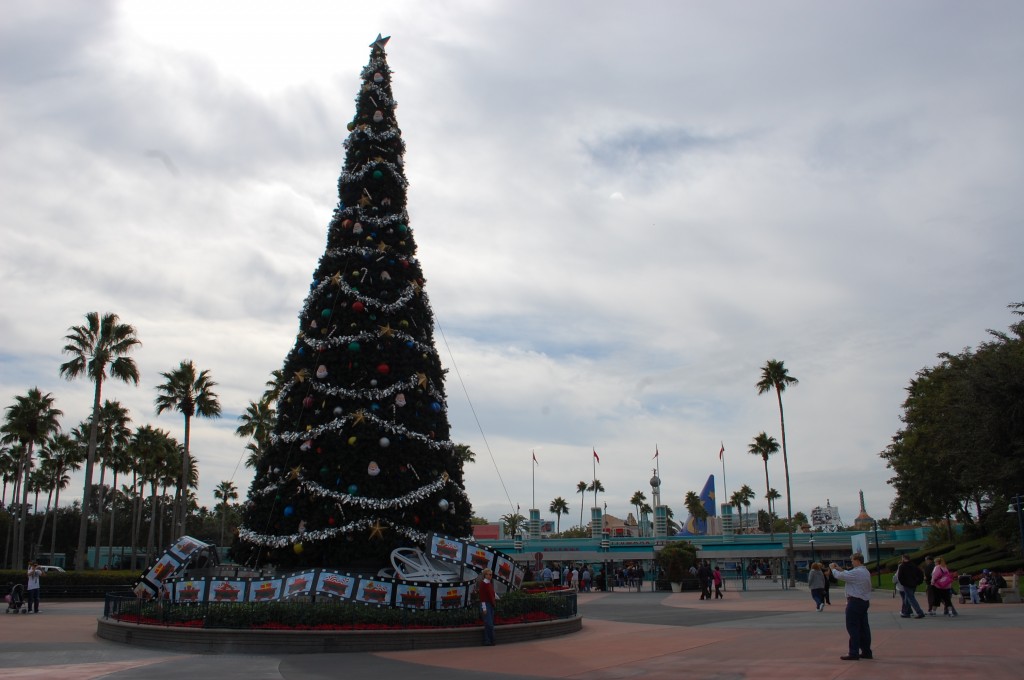 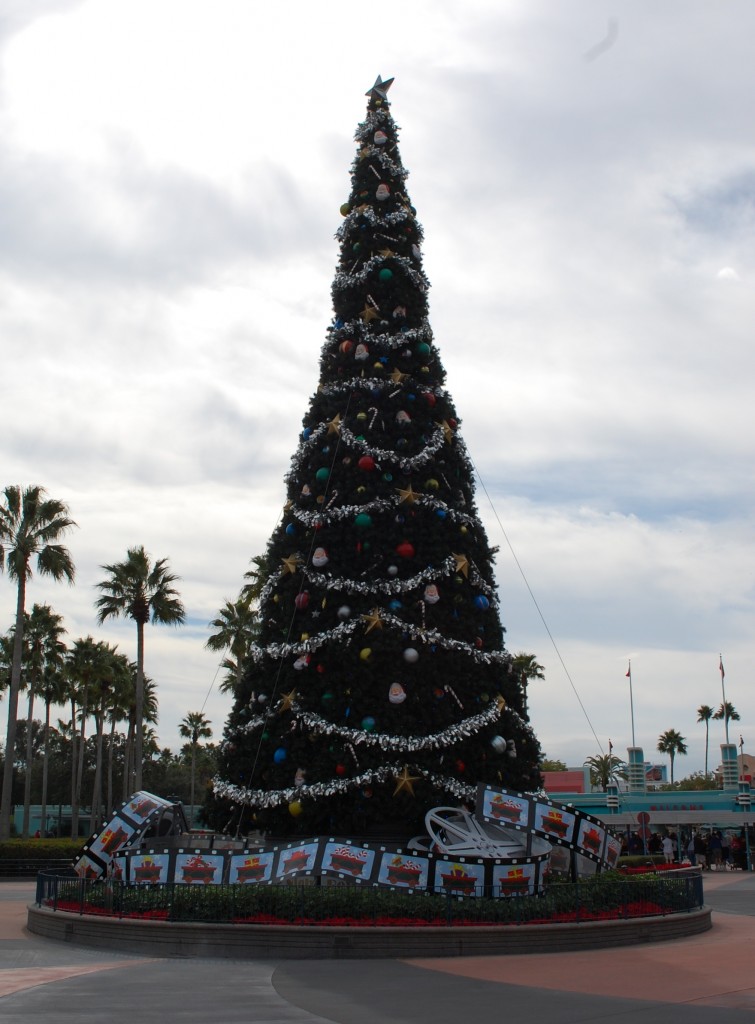 After getting through the gates, we made a bee-line down Hollywood Boulevard, and turned right onto Sunset Boulevard. There, waiting at the end was a beautiful sight… 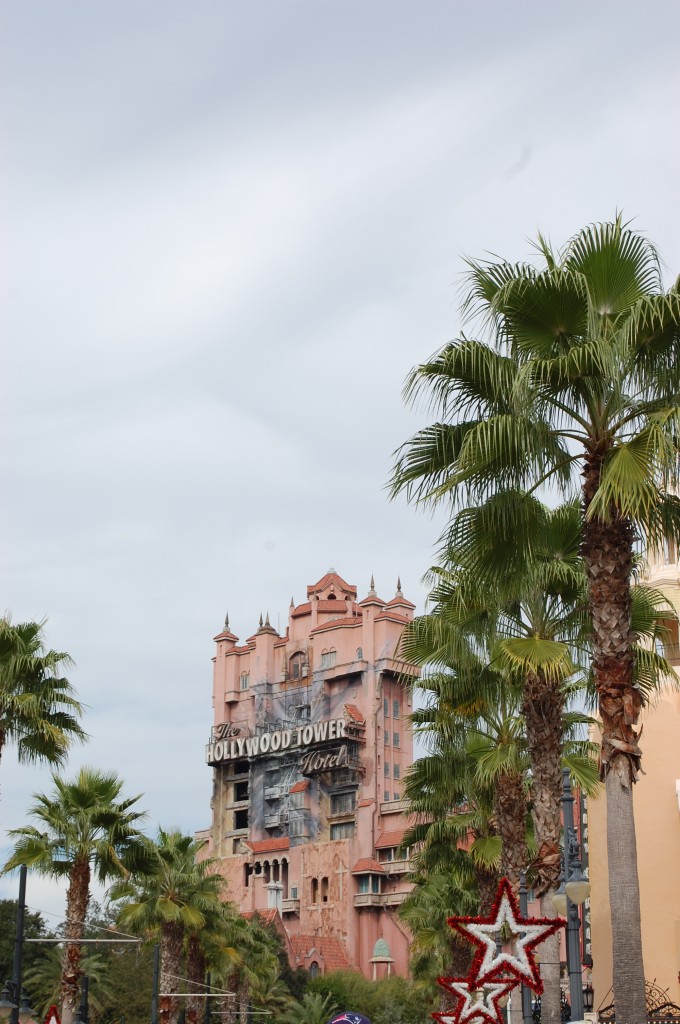 Maria was a bit nervous as well…this promised to be a fun bonding exercise! Here’s our crew waiting for “the room”. 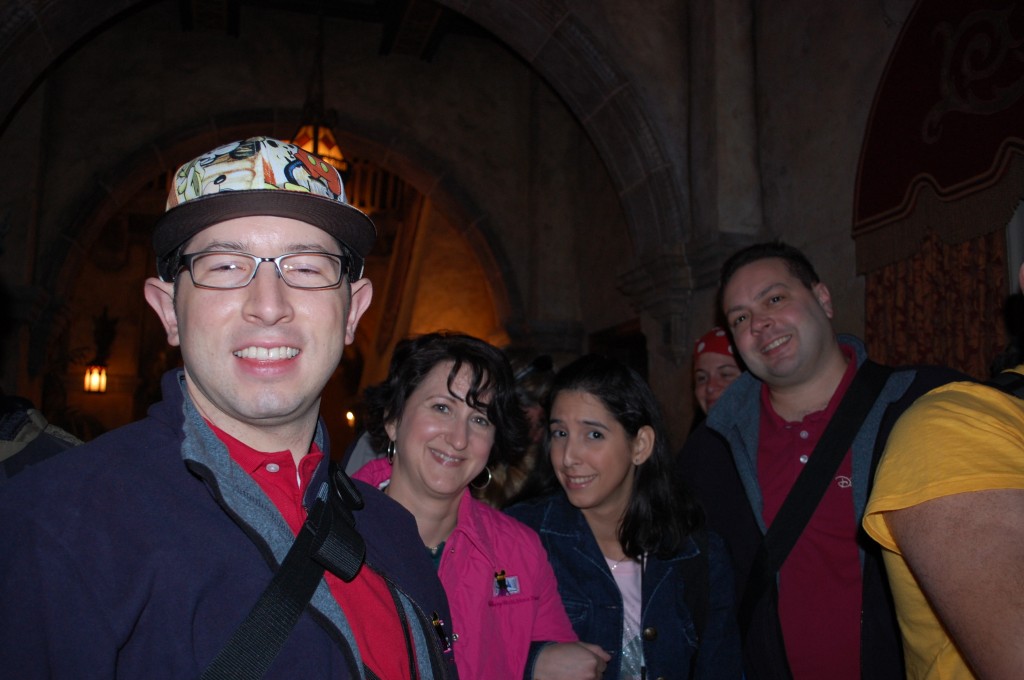 Now, this photo is hysterical. Note Joel holding his hat with one hand while the other is in the air, Marc videoing the whole thing on his phone (it quickly ended up on Twitter), Maria with her eyes closed holding Kathie and Marc (across the aisle), Kathie holding Maria and I…and me holding Kathie and my bag. LOL. 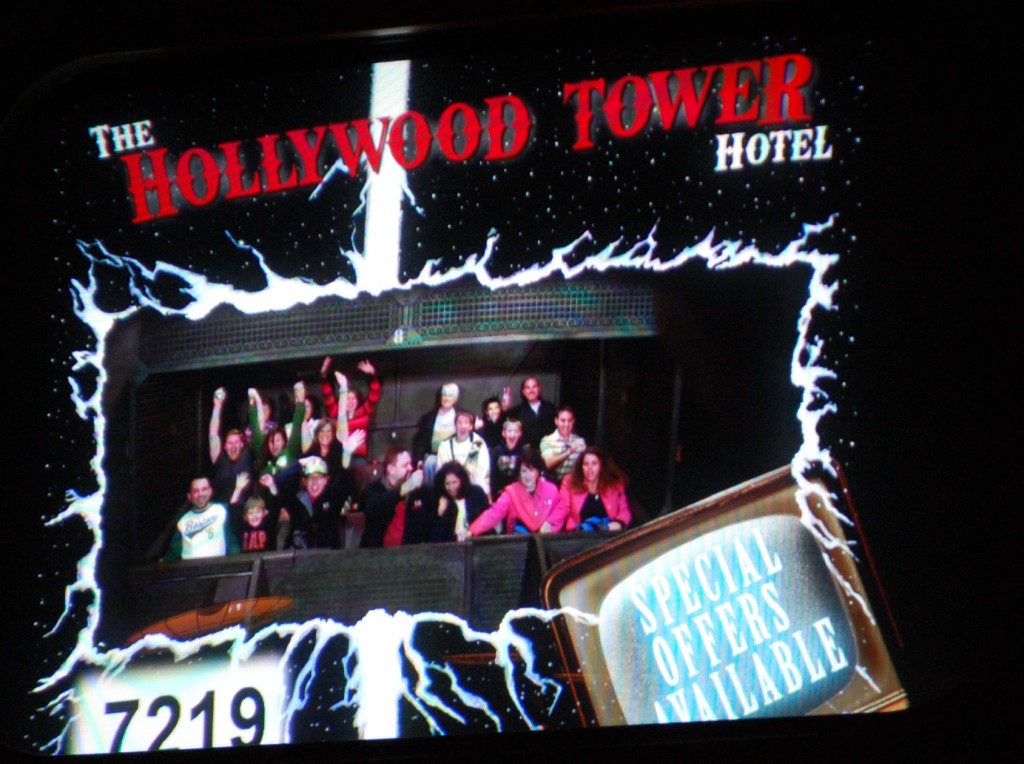 Since we were on a thrill ride roll, we headed straight to Rock ‘n’ Roller Coaster next. 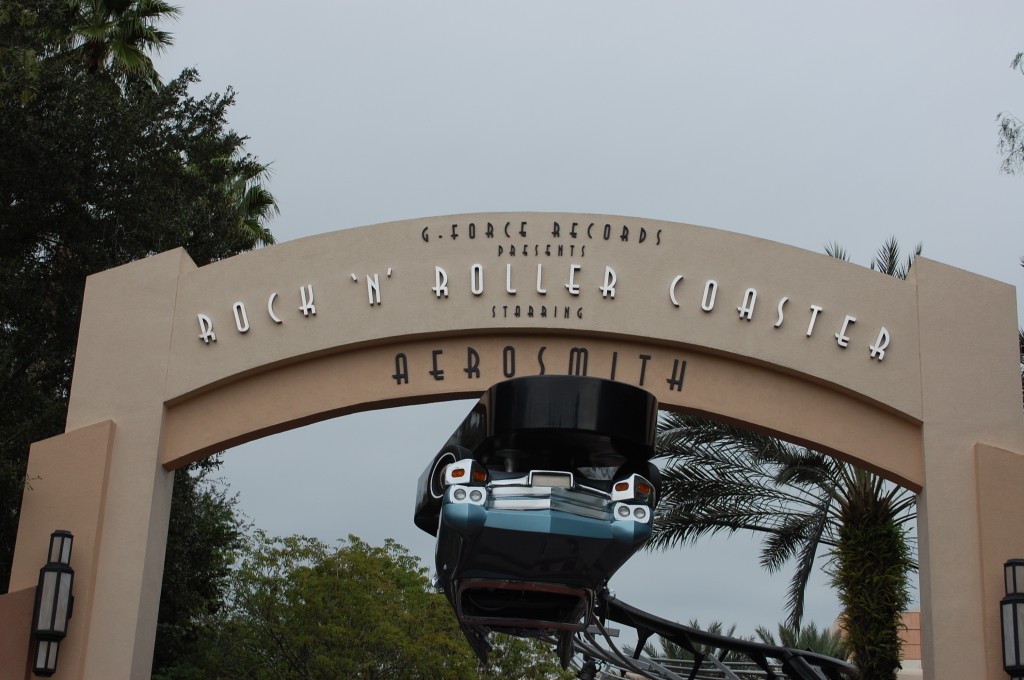 While in line I was telling Joel how no matter how many times I ride this and how much I love it, I always end up with a photo at the end of me screaming at the top of my lungs, with a look of panic on my face. As fate would have it, we ended up in the front row, with Maria and Kathie behind us and Marc behind them. Joel and I decided to PLASTER a big grin on our faces, give a “thumbs up” and hold it for the photo. ROFL at this photo: We Rock. 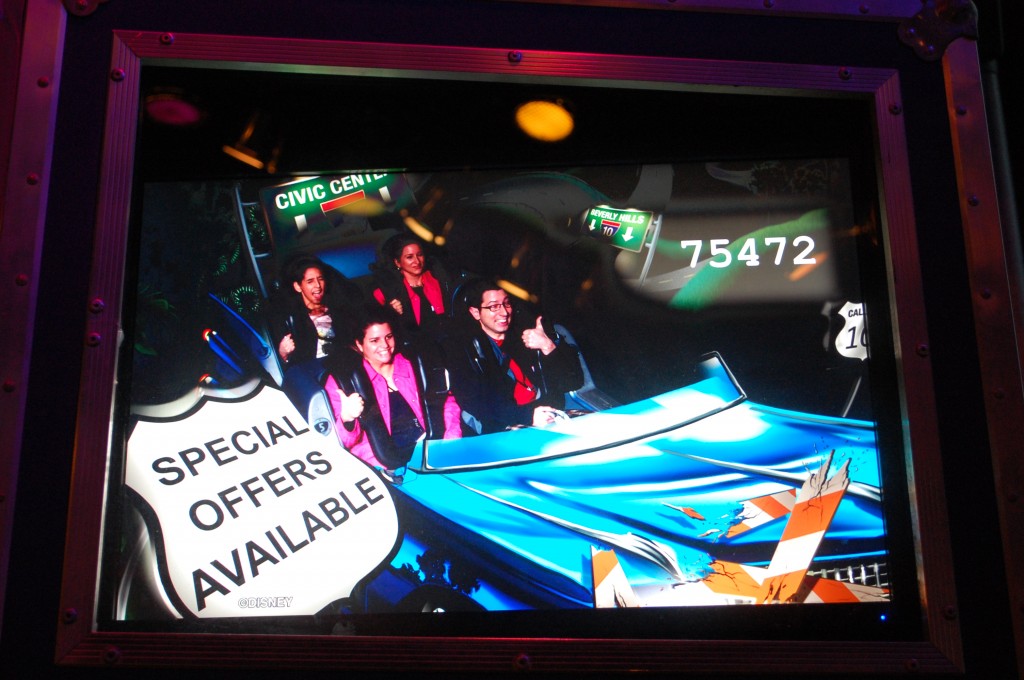 It was Maria’s first time on R ‘n’ R, she did awesome!

Our own “Fab 5” who conquered Tower of Terror and Rock ‘n’ Rollercoaster together…in record time:) 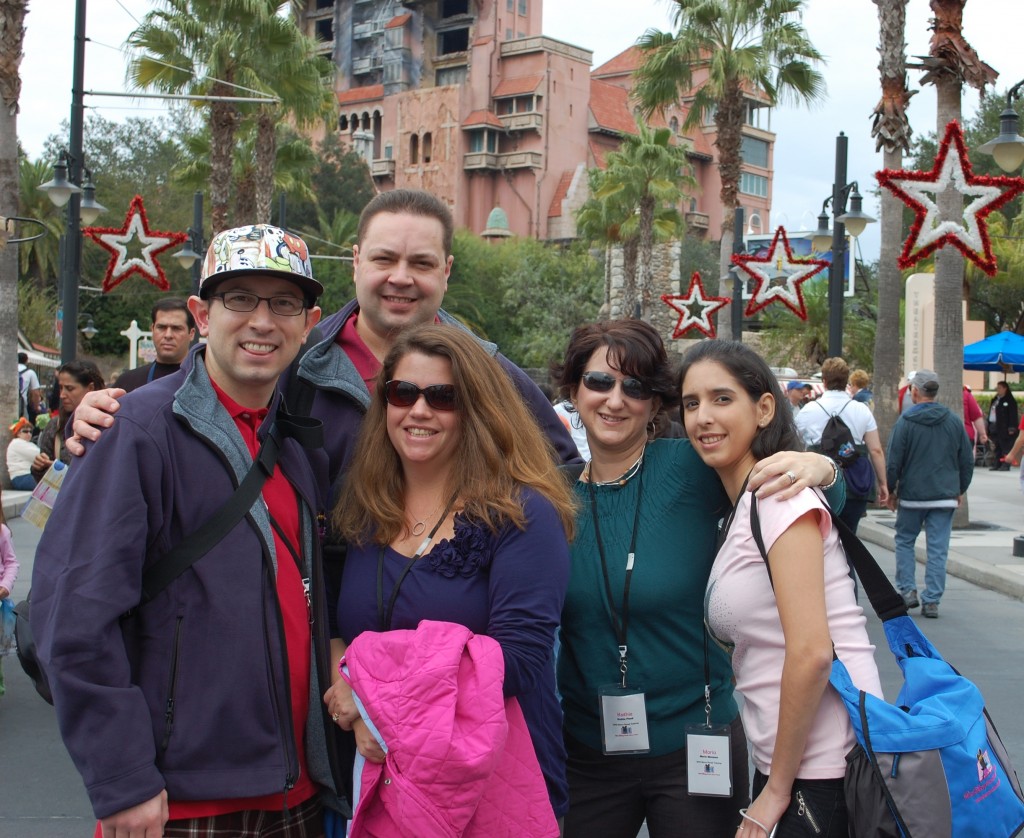 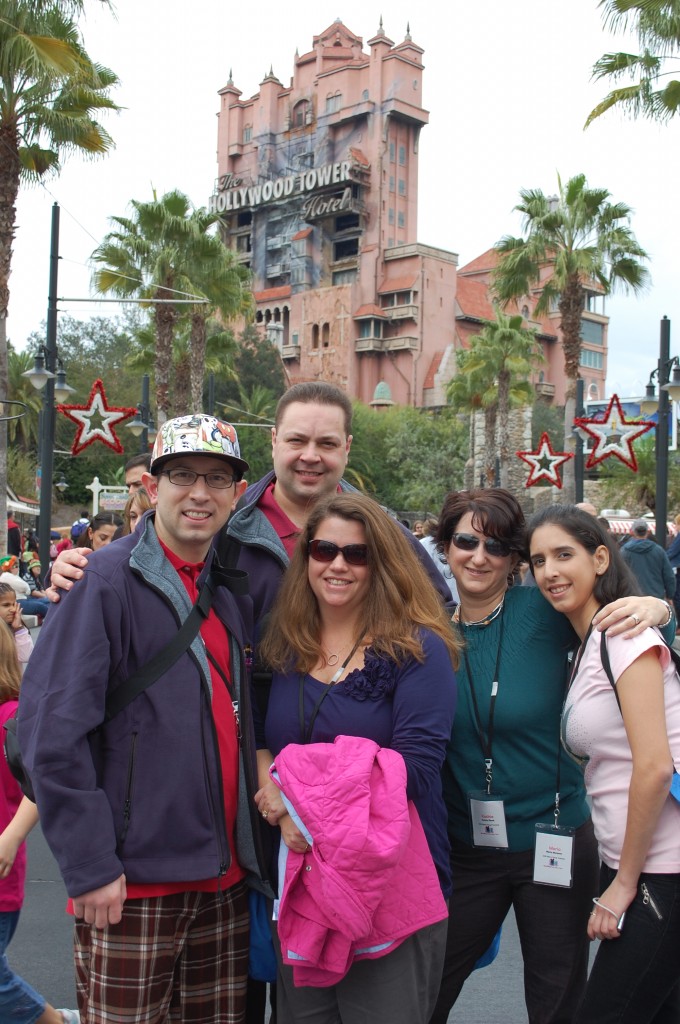 A very special friend of mine from Iowa happened to be vacationing at Disney the same time that I was there. I had discovered that she was at Epcot that afternoon. So, after we all grabbed pretzels, I excused myself while the rest of the group headed over to the Star Tours shop. I lucked out and a boat was just getting ready to leave the launch. I jumped on and recognized a pink Moms Panel coat right away. It was Alumni Mom Michelle M.! I enjoyed chatting with her for the ride to the Boardwalk, where she got off.

Once in Epcot, I headed for Canada where I saw a beautiful sight: my friend, Michelle and her gorgeous daughter Elliana! 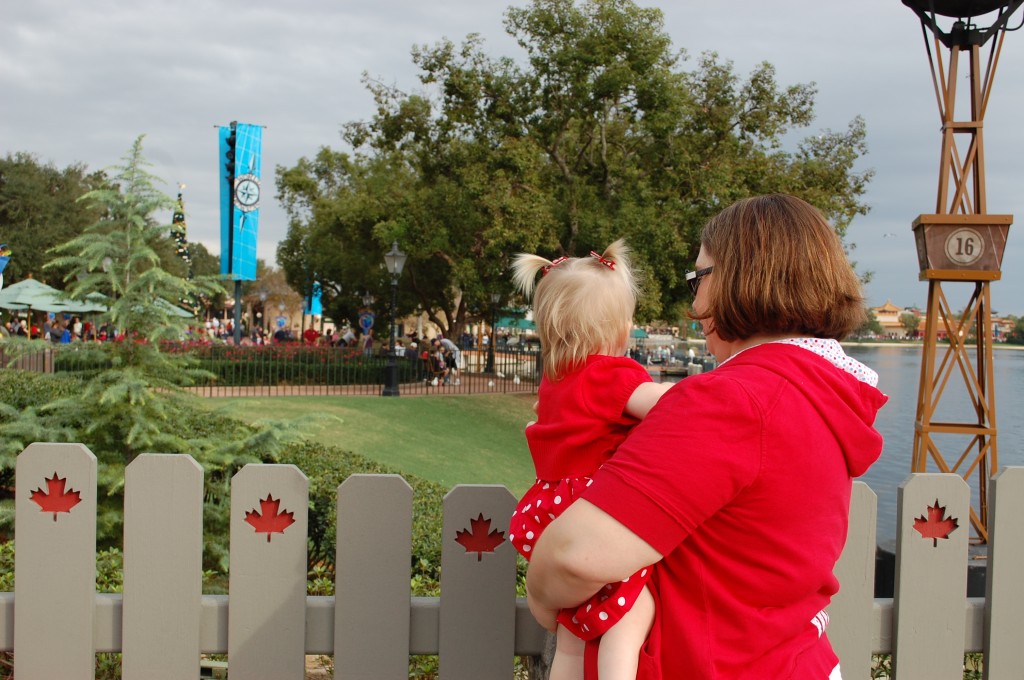 We shared some hugs and smiles. Unfortunately, it was a very quick visit. I had to catch the monorail back to the Contemporary, and get ready to head to dinner. 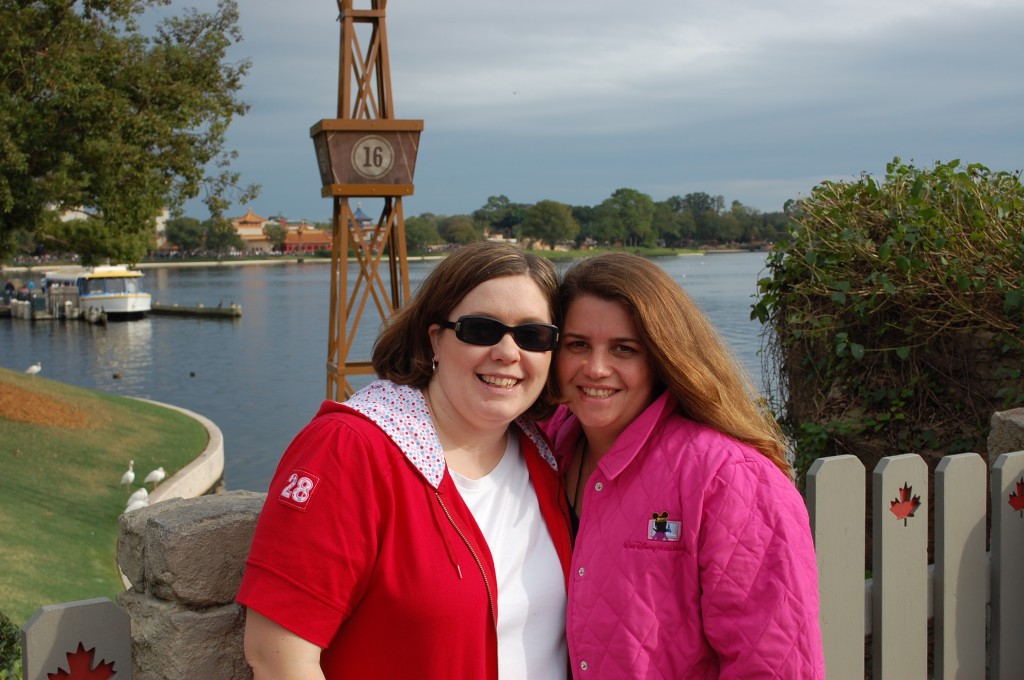 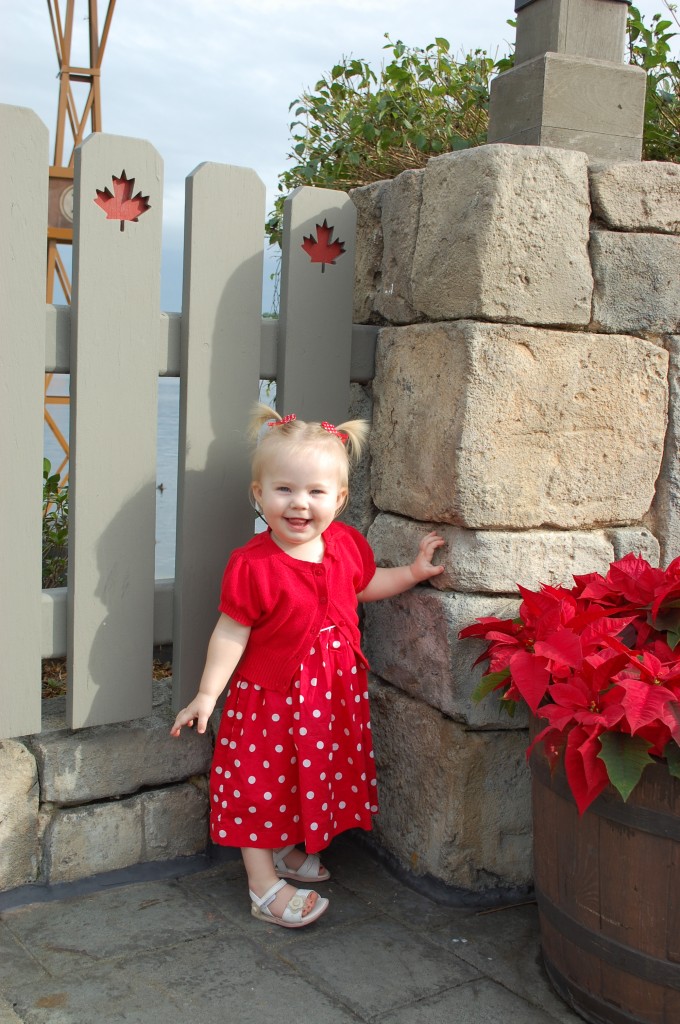 On the way out of the Park, I stopped to enjoy the Christmas themed topiary’s. Here’s Goofy. 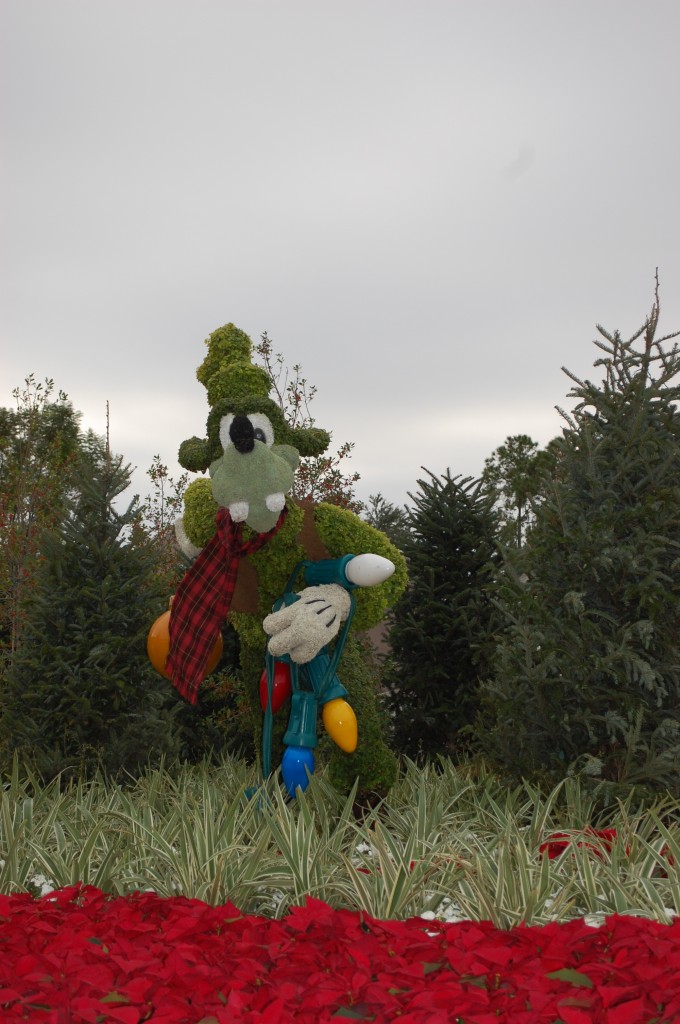 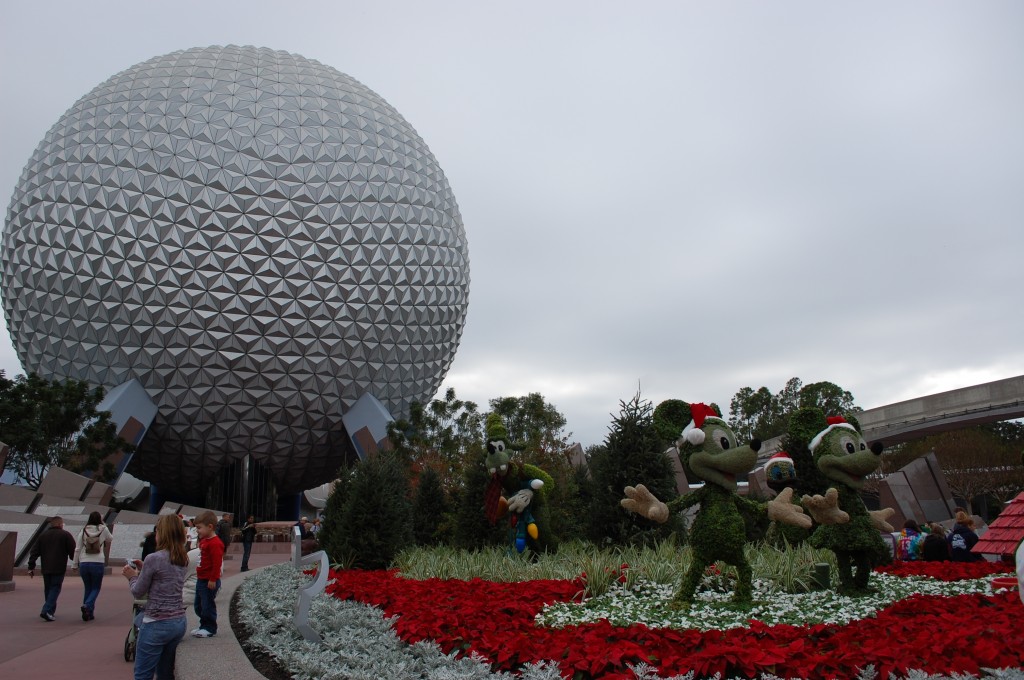 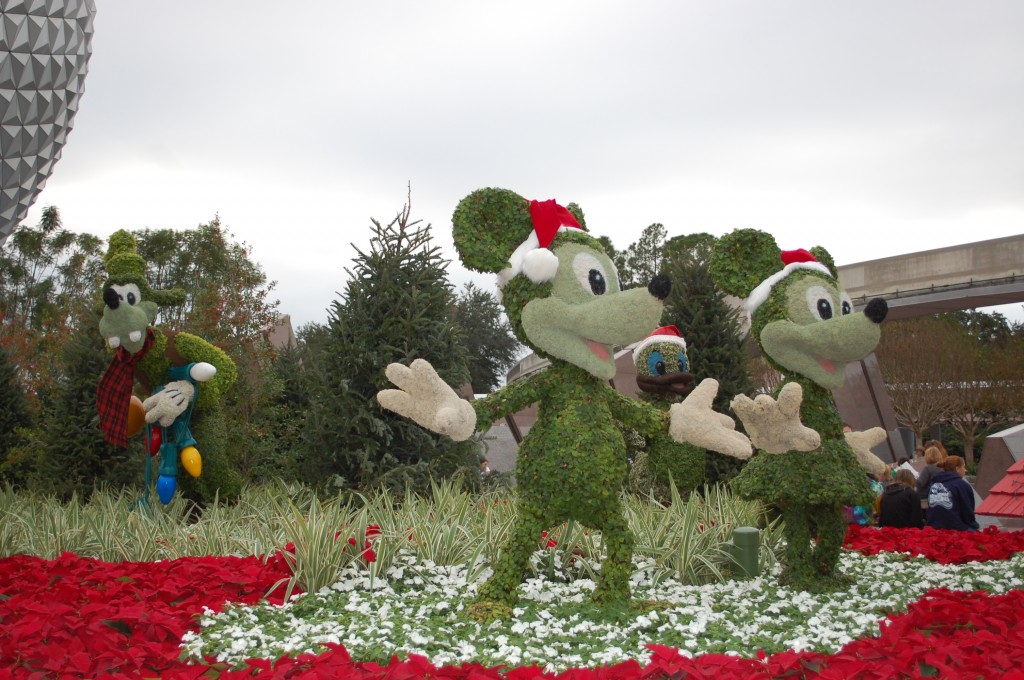 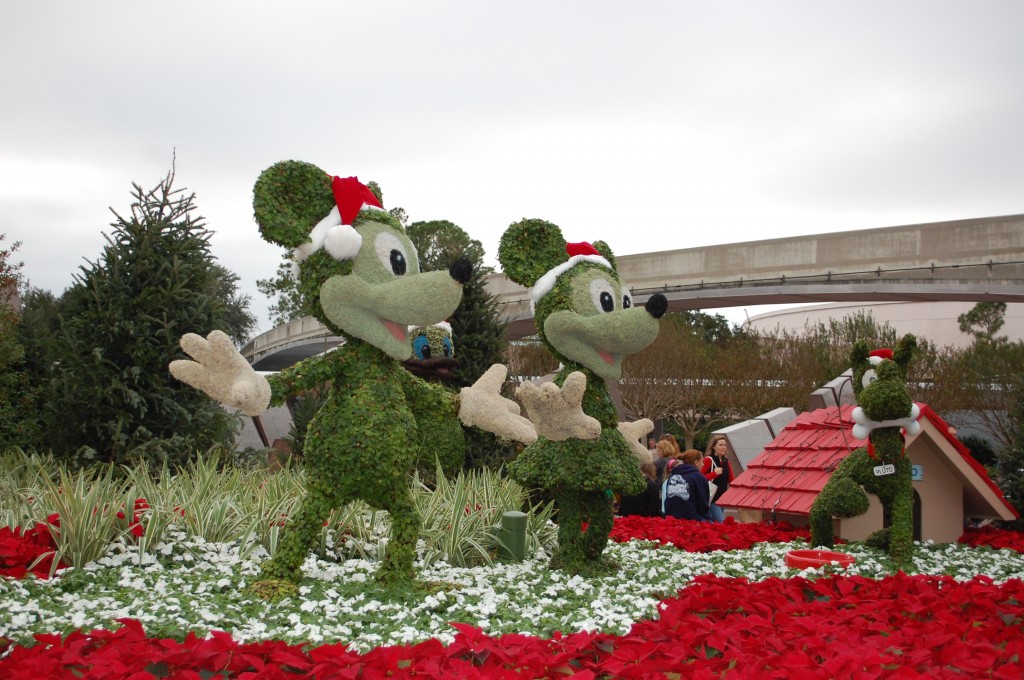 Once back at my room, I snapped a quick photo of my new messenger bag that I *love*. 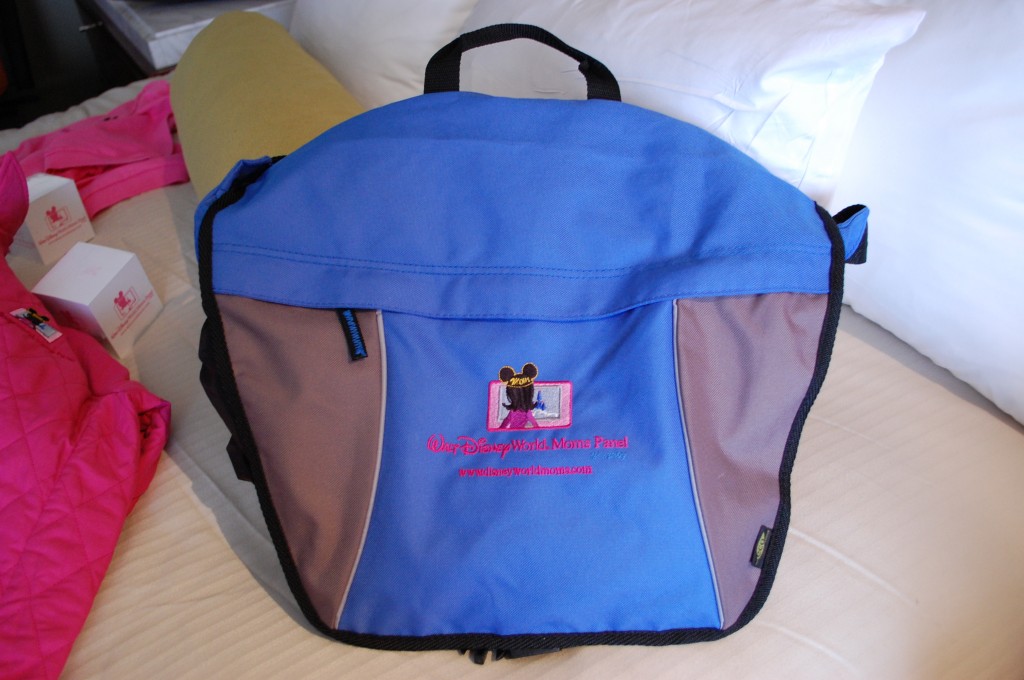 Soon, we were headed out to our exciting dinner event. It was a first for many of us and was SO much fun! Can you guess where we’re headed?!?! 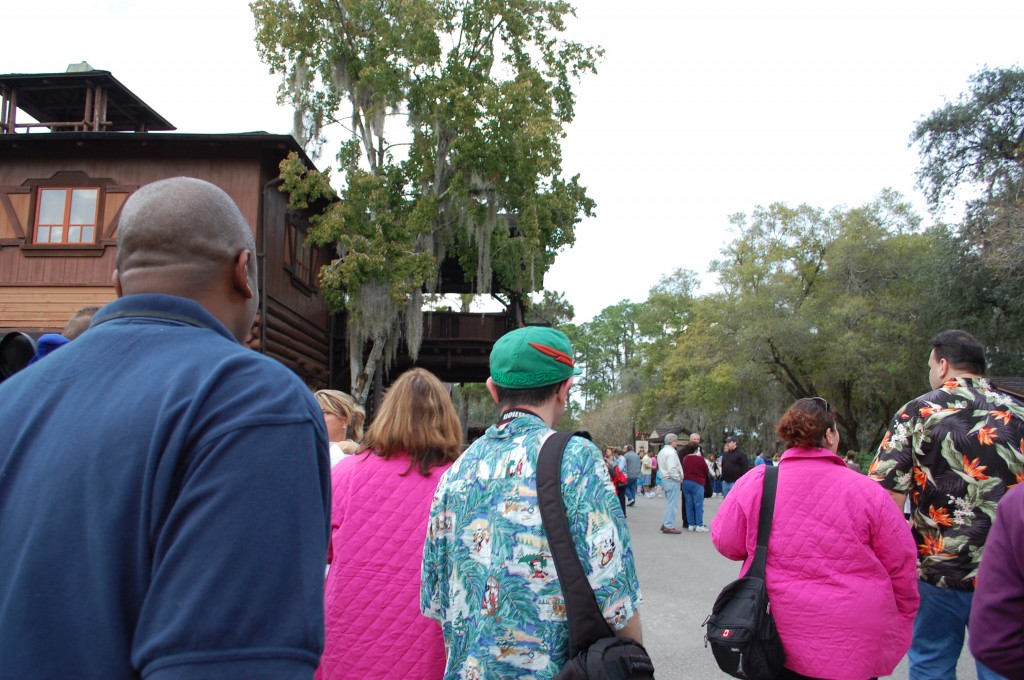 …MUCH more to come…