His Head Hurts my Heart…

I got a call at 1:50 today from Shawn’s school nurse, he had yet another headache. The Tylenol didn’t touch it and he needed to come home.

As mentioned before, I’ve been told by the Neuro that it is NOT an allergy, but a “condition” instead. The level of serotonin in his brain drops for some unknown reason. It’s a “neurological disorder” that he will hopefully, someday outgrow. In the meantime, we are desperately trying to get them under control to break this nearly 4 month long cycle that we have been in. Poor guy, walking out of school today he teared up and asked, “Why does it always have to be ME whose hurting, Mom?” He’s just so darned tired of it all…and honestly, it’s just heartbreaking for me. 🙁

I do have faith in the Neuro. He’s out of Mass General & highly recommended…I just won’t accept that my son has to deal with this indefinitely. Seriously, I post very little about it on here (or Facebook), but the extent of frustration & frequency of headaches is quite crazy really. I don’t give up and am an incredibly determined person…and this is just very, very trying on the soul. Shawn is SUCH a good kid and it just devastates me that I can’t help him. We’ve had ONE day since school started that he hasn’t come home off the bus (or earlier like today) with a headache. His quality of life is just shot right now, and I hate it. 🙁 I just want my outgoing, fun-loving little athlete back. 🙁

I found myself picturing Shawn at Disney a lot today. He adores the “World” and everything about it…hmm…a lot like his Mom 😉 He is always grinning from ear to ear, with his big dimple on display. I often go there in my mind…to Disney…and I gather together the memories of past trips. I went searching for this photo of Shawn and Goofy. 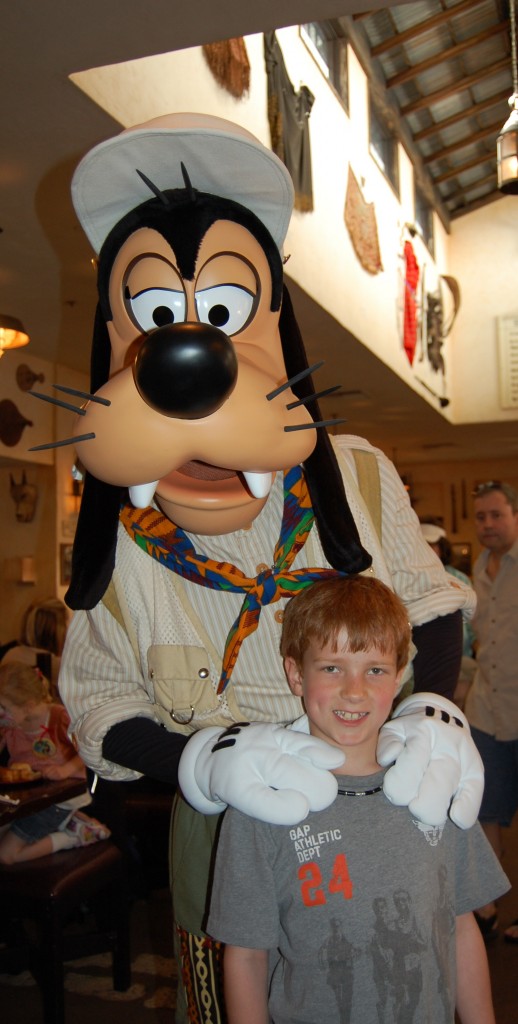 It was during our last trip in April, and he insisted on a pic of just the 2 of them. He remembered how on the previous trip in August, Goofy had given him a high-five…and he thought that was the coolest thing. 🙂 He kept following Goofy around the room with his eyes…and I just sat there smiling and soaking it all in. Little did I know that just a few months after that, I’d give anything to see that happy smile again.

Tears come easy for me these days, which is quite unlike me. It’s a culmination of months of not being able to fix this…and the utter helplessness that I feel. Mom’s are supposed to be able to fix hurts…and when I can’t it, it literally, physically hurts my heart 🙁 Here’s hoping tomorrow is a better day.

This entry was posted in Daily Memories, Disney, Family Life. Bookmark the permalink.